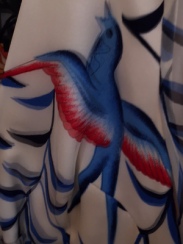 Yesterday two friends and I went to the preview of an auction. The auction is taking place even now, and also tomorrow, at the Eagle Fire House in New Hope, PA. I would be over there right now bidding on antique garments, beaded purses, and whimsical hatstands, if only I had a few bucks and a climate-controlled place to store them. Moths and dampness  are a problem in Lambertville.

Still, the three of us went over there just to fondle and admire the offerings. When we walked in the door a kind man behind a table offered us knitted white cotton gloves. “To keep from ruining the c

lothes?” we said. “No, mostly to keep your hands clean. Some of these things are pretty dusty.” Taking pictures with my IPhone was impossible with the gloves on. The IPhone wants my bare finger.

The clothes were in numbered lots, the elegant antique designer pieces hung on pipe racks, one to a lot, the less rarefied in dusty boxes with other objects of their kind. You had to be prepared to bid (for today and tomorrow the bidding takes place) on a whole cardboard box full of shoes in order to acquire the one pair you desired, which might be tiny-footed, archaically shaped, and made of softest green or magenta kidskin. And dusty. Then I guess the idea would be to sell the ones you don’t want on Ebay.

We spent two hours fondling and admiring, and in the case of hats, occasionally trying on. What torture! A roomful of hats and no mirror.

The bulk of the better offerings came from the Fashion Institute of Technology in New York City. We also saw garments from Hollywood movies. Gene London is selling a few things from his fabled collection. At least one dress had been worn by Joan Crawford. Some were designed by Adrian, master of the slinky gowns the stars wore in the twenties and thirties. He dressed Garbo. His name was legend.

And speaking of legend, we saw hanging from the pipe racks the work of

the great designers of the twentieth century, made in their ateliers in Paris between the wars. The beads. The feathers.  And the labels. This was what I had come to see. Here’s what a Fortuny label looks like. Fortuny, whose technique for pleating silk has never been duplicated, even in the modern day with all our
technology.

Long story short, I was in hog heaven. And you could be, too. As I said, the auction is going on today and tomorrow. Here’s a link to their web site. Be sure to download their catalog with the pictures included. I’d meet you over there, but I have other stuff to do and (as I may have mentioned) I’m out of money right now.

Okay, I confess. As if you didn’t already know this, I confess to being a clothes-aholic. Being properly dressed has been an obsession of mine since seventh grade, when I found myself at a new school, among strangers, with no acceptable clothes and no means to buy any. I’m talking from the skin out. The other girls were wearing training bras, for cat’s sake.  I wore these little cotton undershirts. The horror.

Anyway, the burning humiliation of that year is still with me, and as a result I’m always looking for the perfect outfit, that combination of garments that will cause my enemies to faint with envy and my friends to understand that all is well with me. As a result I am a sucker for fashion magazines, clothing ads, shoe ads, and books by people who promise to tell you how to dress with elegance and style. Of the latter I have three or four board feet in my library.

So today when an email appeared in the inbox entitled “How to Dress for Your Dream Job” I had to pop it open and read it, even though I’m not really looking for a dream job right now, or maybe I’m doing my dream job, if only it would pay something. The email was from Project Gravitas, a clothing company that makes, as far as I can figure out, black clothes with built-in girdles.

Sure, I’m tempted. Who wouldn’t want to go to New York City and slink up and down the streets looking like a tubby trial lawyer in a girdle? But that isn’t my life right now. Sitting around the house writing in a black dress with a built-in girdle would grow uncomfortable in a couple of hours. Then I would have to peel it off and throw it in the corner along with yesterday’s bra. 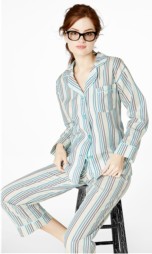 The truth is that before we figure out how to dress for our dream jobs we have to figure out what our dream jobs actually are. Writers need one serious outfit to wear to town, so impeccable that agents, editors, and publicists will faint with respect and fear, another to wear to conventions, so charming and approachable that readers will seek our company and beg to buy our books, and yet another to sit around in all day like the shlubs we really are. Pajamas are good. These are from BedHead.

But maybe your ambitions are a little more grandiose. Here’s a dress fit for a queen, Elizabeth’s coronation dress in fact. Maybe if you wear it they’ll give you a job like that.